You may have allergic rhinitis if … 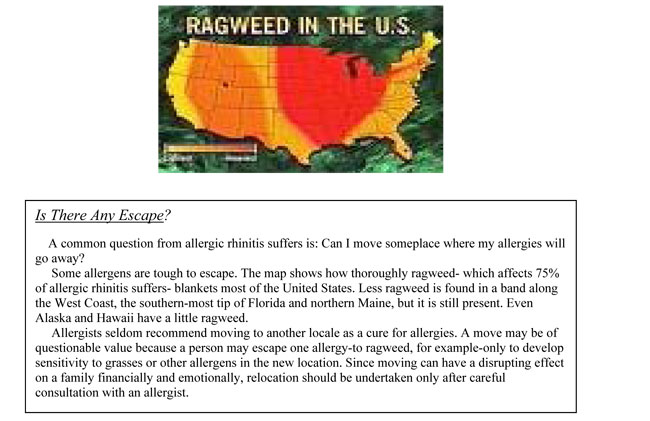 Advice from your Allergist

You may have allergic rhinitis if …
You sneeze a lot, often in rapid succession…your nose is runny, congested or stuffy…you’re bothered by itching of the nose, eyes, throat or roof of the mouth…you’re nagged by postnasal drip… your ears pop or are plugged… you have a decrease sense of smell…and/or you get sinus headaches.

What is allergic rhinitis?
Known to most people as hay fever (see box below), allergic rhinitis is a very common medical problem affecting more than 15% of the population, both adults and children.

Some people may experience both types of rhinitis, with perennial symptoms worsening during specific pollen seasons. As will be discussed later, there are also other causes for rhinitis.

What causes the sneezing, itchy eyes, and other symptoms?
When a sensitive person inhales an allergen (allergy-causing substance) like ragweed pollen, the body’s immune system reacts abnormally with the allergen. The allergen binds to allergic antibodies (immunoglobulin E) that are attached to cells that produce histamine and other chemicals. The pollen “triggers” these cells in the nasal membranes, causing them to release histamine and the other chemicals. Histamine dilates the small blood vessels of the nose and fluids leak out into the surrounding tissues, causing runny noses, watery eyes, itching, swelling and other allergy symptoms.

Is allergic rhinitis ever the cause of other problems?
Some known complications include ear infections, sinusitis, recurrent sore throats, cough, headache, fatigue, irritability, altered sleep patterns and poor school performance. Occasionally, children may develop altered facial growth and orthodontic problems. Allergy treatment can eliminate or alleviate most of these problems.

Are all cases of rhinitis caused by allergies?
No. Not all rhinitis symptoms are the result of allergies.

Below are listed the three most common causes of rhinitis with some of their characteristics.

The common cold is a good example of an infectious rhinitis. Most infections are relatively short-lived, lasting from 3 to 7 days.

Irritant rhinitis also called vasomotor or nonallergic rhinitis. People with irritant rhinitis develop swelling and congestion of the nose when they are exposed to irritating substances that may not cause symptoms in other people.
The symptoms of allergic and irritant rhinitis can be the same. Many people experience a combination of both types of rhinitis.

How is allergic rhinitis diagnosed?
Your allergist may begin by taking a detailed history, looking for clues in your lifestyle that will help pinpoint the cause of your symptoms. You’ll be asked about your work and home environments…your eating habits…your family’s medical history…the frequency and severity of your symptoms…and miscellaneous matters such as if you have pets. Then, you may require some tests. Your allergist may employ skin testing, in which small amounts of suspected allergen are introduced into the skin. Skin-testing is the easiest, most sensitive and generally least expensive way of making the diagnosis. Another advantage is that results are available immediately. In rare cases, it also may be necessary to do a special blood test for allergens, using the RAST or other methods.

Once allergic rhinitis is diagnosed, what can be done to alleviate the symptoms?
Avoidance, medication and immunotherapy – or allergy shots – are the main treatments for allergic rhinitis.
Avoidance – a single ragweed plant may release one million pollen grains in just one day. The pollen from ragweed, grasses and trees is so small and buoyant that the wind may carry it miles from its source. Mold spores, which grow outdoors in fields and on dead leaves, also are everywhere and may outnumber pollen grains in the air even when the pollen season is at its worst. While it’s difficult to escape pollen and molds, here are some ways to lessen exposure.

Medication – When avoidance measures don’t control symptoms, medication may be the answer. Antihistamines and decongestants are the most commonly used medications for allergic rhinitis. Newer medications, such as cromolyn, inhibit the release of chemicals that cause allergic reactions. Medications help to alleviate nasal congestion, runny nose, sneezing and itching. They are available in many forms, including tablets, nasal sprays, eye drops and liquids. Some medications may cause side effects do its best to consult your allergist if there’s a problem.
Immunotherapy – Allergen immunotherapy, known as “allergy shots,” may be recommended for persons who don’t respond well to treatment with medications, experience side-effects from medications or have allergen exposure which is unavoidable. Immunotherapy does not cure allergies but can be very effective in controlling allergic symptoms. Allergy injections are usually given at variable intervals over a period of two to five years.

There are many ways of treating allergies, and each person’s treatment must be individualized based on the frequency, severity and duration of symptoms and on the degree of allergic sensitivity. If you have more questions, your allergist will be happy to answer them.